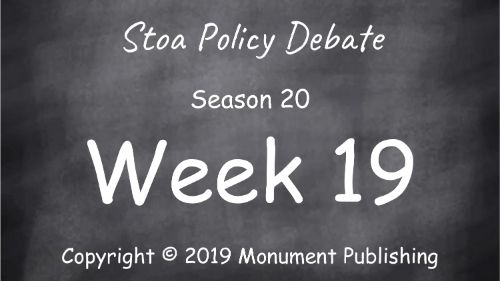 Affirmative plan abolishes “fractional reserve banking” (FRB) by setting a 100% reserve requirement. In the Status Quo, FRB is the system used by all banks in the normal course of their operations. Banks take in depositors’ money, but that money does not simply sit in the bank as digital assets or cash in the vault. Most of it (except for the reserve, which could be only 10%) is lent out to borrowers to earn money for the bank. It could go to car loans, home mortgages, business loans, or other investments that will earn a return that will pay the expenses and profits of the bank and pay for the (meager) interest the bank pays its depositors for the use of their money. They will keep in reserve (either cash in the vault or digitally deposited in another bank, a reserve bank) the remainder that is not loaned out or invested elsewhere. The reserve is held to supply the needs of depositors who might be expected to withdraw some of their money (or write checks on it), but who are not expected to demand all of their money at once. If the Status Quo has a reserve requirement of 10%, it would mean a bank could lend out 90% of its depositors’ money, and only keep 10% available for the depositors’ immediate use. What happens if a lot of depositors suddenly show up (or write big checks) and their demand exceeds the 10% liquidity that the bank has available? In the old days, there would be a “run on the bank,” as word would get out that the bank doesn’t have enough money, panic would ensue, and the bank would collapse. They might try to salvage the situation by quickly selling their assets (all those outstanding loans) at discount prices (and huge losses). They could also try to borrow money overnight from other banks. If all else fails, they could turn to the federal government for a bailout, either gifts or loans from the taxpayers to satisfy the depositors until the situation calms down.
Historically, some have called FRB a “fraud,” since it appears depositors are promised access to all of their money but in fact the bank only has 10% of it. If banks promised to put all depositors’ money into a safety deposit box, and then lent it out, that would indeed be a fraud. But that promise was never made. Depositors are entering into a contract whereby they get low-cost or free banking services and interest on their deposits, in exchange for the bank having the right to use their money and earn a return on it.
The AFF plan tries to solve for the alleged “fraud” and the panics/bailouts by setting the reserve requirement at 100%. All the money of all depositors would always be available at all times. It may sound good in theory, but ask yourself this: How would a bank make money to pay for its branches, employees, equipment, etc. if it cannot use depositors’ money for investments and lending? They would have to simply charge depositors fees for the privilege of storing their money at the bank; essentially, depositors would get a negative interest rate on their money. And all that lending, which drives big segments of the economy, would never happen, reducing economic activity and losing jobs. Huge amounts of money would be taken out of the money supply, leading to deflation and probably another Depression.