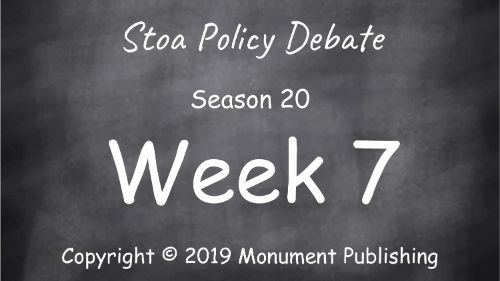 Stoa has tightened up its evidence standards for Season 20 with stricter guidelines in how evidence is quoted. Monument Members will be ready.

As you know, debaters are allowed to read evidence into the round with selected parts underlined and read aloud, with some words not orally read (but available in writing). In Monument briefs and cases, we supply evidence that has words already underlined for the debater to suggest what we believe should be read into the round. We take care that the underlining respects the context and intent of the author, but historically not all TP debaters have been careful in this regard. Unfortunately there has often been substantial abuse to the point that evidence read in debate rounds sometimes unethically misrepresents the intent of the original source. New Stoa rules restrict debaters from taking such liberty with evidence.

We at Monument have always had a policy of publishing evidence consistent with the second item, rule (d) above.  If we are quoting two separate sections of an article in the same card, we have always put a break between them with a statement like “END QUOTE.  He then goes on later in the same context to say QUOTE:” … followed by the rest of the evidence. However, we are not aware of any debate league that has ever required full sentence underlines, as in rule (c) above, so this requires some modification to our evidence.

At Monument, we will ensure our evidence complies with rule (c) by starting underlined material with a capital letter and ending with an end mark (i.e. period). The only exception will be statements in parentheses that do not add any meaning.

Since we just became aware of this rule change, prior to September 16 Monument released two cases and two briefs that had some evidence outside of the new Stoa rules. These have been corrected. Here are links for your convenience:

For the rest of Season 20, Monument releases will conform to Stoa’s new standards.