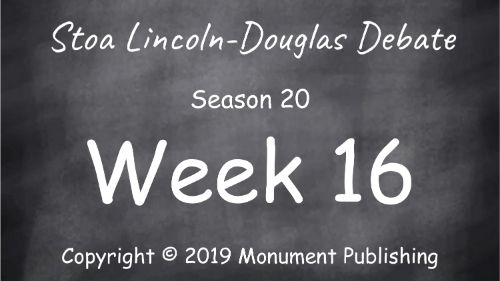 This case is a Resolutional Critique, or what is commonly called a Rez K (the “K” comes from the Greek spelling “Kritik”). A Critique just means that you’re opposing the resolution not by saying that the negative side is better, necessarily, but that affirming the resolution really doesn’t make sense.

You do that by exposing the inconsistencies that the judge would have to accept in order to vote affirmative. First, that assimilation and multiculturalism are often not in conflict. Second, that promoting assimilation often backfires, creating minority cultures that more tenaciously hold to their own principles and more fervently resist assimilation.

Mark Csoros
Mark’s competitive history includes top awards in policy, Lincoln-Douglas, parli, extemp, and apologetics in NCFCA and Stoa. He is currently a rising Junior at the University of Texas, dual-majoring in the Plan II Honors Program and the School of Business. Through his connections with forensics and writing for Monument, Mark earned an internship at the Texas Civil Justice League, where his research aims to increase stability and fairness in Texas’ civil justice system. In his spare time, Mark plays for UT’s rugby team and serves as the Domestic Affairs Editor for the Texas Orator, UT’s student-led political review.