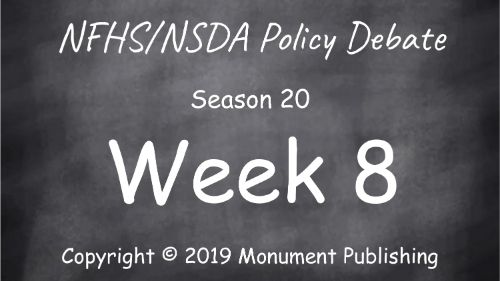 AFF plan ends U.S. weapons sales to Ukraine. Affirmative arguments center on how Ukraine is unstable, has lost weapons, and has the ability to produce arms for themselves. They will also argue that Russia will retaliate against the U.S. However, many of these claims are overblown. Weapons theft has declined in Ukraine and many of their militant groups have been incorporated into the standing military. Russian risks and impacts are also overestimated.

The disadvantages in this brief highlight the fact that the Ukrainian military is not as adept as they seem. U.S. weapons would send a message to Moscow that Ukrainian sovereignty is important, thus deterring Russian aggression in the region. Cutting arms sales also harms the U.S. arms industry by allowing other nations to fill the void and sell to Ukraine. One of those nations is China, who has been increasingly involved in Ukraine’s economy. It would be unwise to leave Ukraine to fight Russia alone and cede the country to our two largest geopolitical rivals.