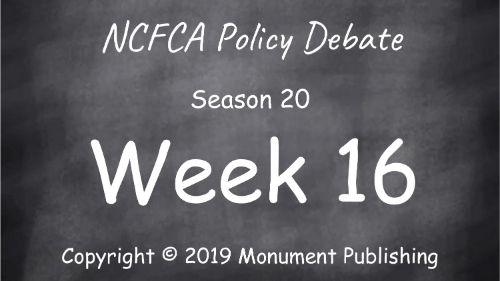 The AFF case mandates that the TVA increase its transparency and its clean energy usage. The NEG position argues that it is already doing so, and that additional clean energy is not something the TVA can afford right now.

The TVA hired a new CEO in early 2019. Since then, they have been establishing public committees and having public comment meetings. The reason they may not want the public to listen to their board meetings: Competition. The TVA competes with other electricity providers and does not want sensitive information to leak to them.

The TVA’s integrated resource plan for the next twenty years continues their trend away from coal-based electricity. They move to more nuclear, natural gas, and solar. Mandating a completely clean TVA, however, would mean that the weather would have greater control over electricity output. Keeping nuclear and other options around would mean that the TVA would not need large energy reserves each time it was cloudy.

Finally, the AFF plan would have the TVA spend money it doesn’t have. The TVA is not federally subsidized. Instead, it pays for its existence with bonds and rate hikes. The TVA current is at about 2/3 of its legal debt limit and has no planned rate hikes for the next ten years. They would have to increase both their debt and their rates to pay for these new efforts, and both actions would have negative consequences, especially for the poor, who would have to pay more for their energy bills.